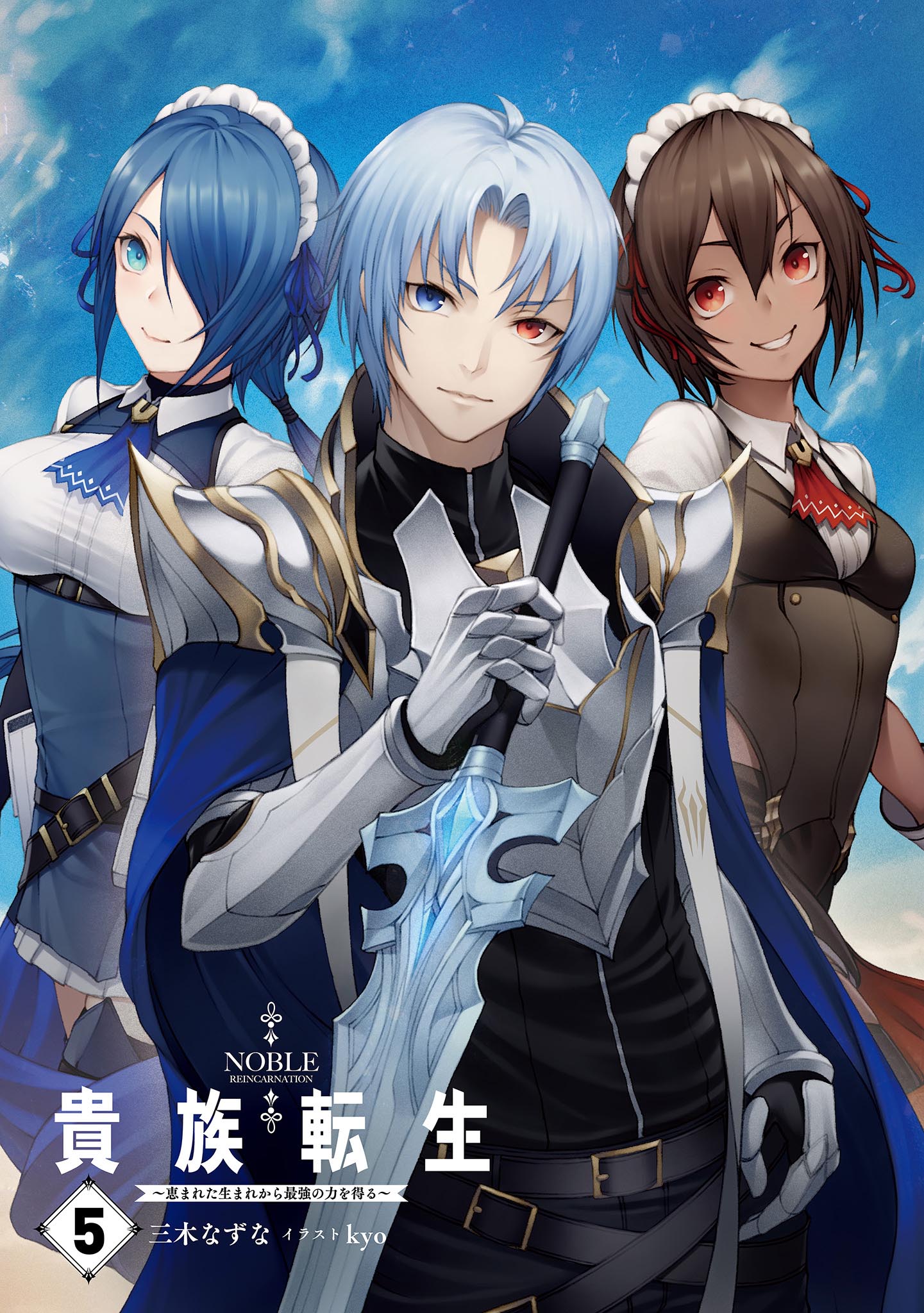 I left the Imperial Capital to Henry, Oscar, and the Viziers, and headed for the province of Saraluria.

Saraluria is the place where innovative technology, the veins that support it so to speak, lie dormant.

This is something that could drastically change the future of the Empire and, by extension, the lives of all humankind.

After moving Margrave Gerdt away from there and putting Saraluria under my direct control, I decided to go there myself.

I dressed up as a scion of a traveling merchant family, with only one servant in tow.

The maid accompanying me is Lou Peiyu.

She’s the daughter of a tribe that once challenged the Empire to a battle and lost, and since then I’ve taken over most of the family, she’s been working for me as my loyal maid.

Since she had not been a maid very long, and unlike Evelyn, Zoe, and other capable maids, she was an ordinary girl, I had brought her along as camouflage.

Incidentally, they are a family with the unusual custom of having the last name in front and the first name behind.

Peiyu was following me, carrying big baggage with her.

What’s the matter? I turn to Peiyu, who almost mispronounced my name as we walk.

She looked exhausted from a large amount of luggage, she might want to take a break.

“Fumu, I’ve never actually seen it myself, except to say that as far as the eye can see, it’s all sand.”

“Have you ever seen the ocean?”

“Then it’s easy to understand. Just like the ocean, but it’s all sand.”

“T-Then the crops won’t grow at all! And the prey for hunting probably won’t thrive either. ……”

She is aware that crops don’t grow in sandy soil.

“Yeah, that’s right. The so-called barren land goes on and on. That’s why Saraluria became the largest province in the empire. It’s a collection of barren wastes, unsuitable for farming or hunting.”

As Peiyu walked along, she thought of the desert with a distant look in her eyes.

After walking for a while, a checkpoint came into view at the end of the road.

“Master, something is not right.”

Even though it was still some distance to the checkpoint, the situation had reached such a point that I could smell it.

The front of the checkpost had become noisy and chaotic.

Even from a distance, one could see that there was a struggle going on.

I headed for the gate with Peiyu, who followed me obediently.

As we approached the gate, we could see what was going on.

A group of people dressed as commoners were tearing down various parts of the gate.

They were not using carpentry tools, but rather, sickles, hoes, and other such tools.

Therefore, it was inefficient and time-consuming to destroy it.

Some officials and soldiers were different from the group of commoners.

They were outnumbered and outgunned and were already beaten and moved to a distance, groaning.

I thought for a moment, then cautiously approached the group and then addressed the man who had just broken down the fence.

“Hey there, what’s this all about?”

“I’m just a traveler. What’s this all about? What’s going on here?”

I have heard of it, but it’s the first time I’ve seen it in action.

It is a kind of self-help activity of the people, in which a group of people stand up against some unreasonable situation and destroy the houses and things of the unreasonable person anyway.

The basic idea is that you basically just break things, don’t kill people, and hurt them as little as possible – that’s the basic theme of the project.

On closer inspection, it is true that some of the officials and soldiers who have been knocked down are groaning and unable to move, but none of them appear to have been mortally wounded.

“The checkpoint here is terrible, you know how much they charge you.”

“Half of what we’re carrying.”

“That’s right. I bring vegetables and stuff to the city down the road, and they always take half of what I bring here.”

“So everybody’s just pissed off, and this is what happens.”

I looked around, convinced.

The others, as if to relieve their pent-up frustration, were smashing down the barrier with unfamiliar tools.

“It will all be over soon, so just stand back and watch.”

I nodded, beckoned to Peiyu, and did as I was told.

The demolition continued for the next hour or so, and then the men pulled away, satisfied.

“No, wait a little longer.”

After watching there for a while, a cloud of dust approached from the distance.

It was an official on a fat, well-fed horse and about a hundred soldiers who had come to the front of the barrier.

The man looked at the destroyed barrier and stormed on his horse, almost as if he were stamping on the ground.

“Looks like that’s the official in charge of this checkpoint.”

Leaving Peiyu behind, I approached the gate.

On the way, one of the soldiers approached me and called out to the man.

The man turns from his horse and looks down at me.

“What the hell are you!”

I silently stepped on the symbol of the knocked-down gate – most importantly, the fence door.

Then put on the performance that showed, I’m the one who did this.

At the man’s command, several soldiers came at once.

I easily dodged the attacks of the spear-carrying soldiers and dropped my sword hilt on their napes.

The men, who had been hit in the vital spot, instantly turned white and fell down with a thud.

“Come at me together”

“You fucking bastard! You guys, kill him!”

The fat official gave the order as if he were a bandit.

The soldiers came at me one after another, and one by one, they were defeated by hit-and-run and hand-to-hand combat.

I snorted, looked at the officials with condescending eyes, and turned myself around.

The official uttered a curse in a voice that sounded like it was squeezed out from the depths of his gut.

With these words at his back, he continued walking.

That night, I took lodging in a nearby inn.

I write a letter by the light of a lantern.

Peiyu, who was in the same room with me and helping me write, timidly spoke.

“Master was amazing today, you were so cool.”

“You mean you were expecting it to be like that?”

“That’s right. When they were breaking down the gate, there were not many soldiers and there was no one who looked like he was in charge. That piggy-looking guy must have been in charge.”

“If I do that, the hatred will be directed at me. That kind of person would rush in with a new kind of hatred.”

I continued to hold the letter as I answered Peiyu’s question.

“All right. Give this to the person who brings the political papers from the Imperial Capital.”

Saying that I handed the letter to Peiyu.

“I understand. Um, what is this about?”

I looked at Peiyu and smiled.

As an ordinary maid, Peiyu doesn’t really know the line that she is not allowed to ask.

If it’s confidential, I won’t tell her, but this is good.

“It’s a response to the demolition.”

“Eh? Aren’t you finished with that one?”

“It’s about the future. I have issued an Imperial decree to the absent lord to change the law if there are more demolitions in the future.”

“In the meantime, the people who participated in the demolition will be punished.”

Peiyu was about to say something, but I held up my hand to stop her.

“It’s the same thing that led to the demolition – in this case, the swine. It will be punished in the same way. The punishment will be heavier on the official.”

I chuckled at Peil’s “going to”.

Having witnessed today’s incident, she seems to have completely fallen on the side of the people.

“That’s right. And it is going to be the higher the status, the heavier the punishment.”

I gave the order to the absentees to ‘Prepare a draft,’ so we’ll have to scrutinize it after we get back to the capital to see if it follows the direction I’ve ordered.

“That’s true if you’re an aristocrat. ……, it might be better if it’s one notch below the death penalty.”

Peiyu, who had been a staunch supporter of the people, seemed surprised by this.

“It is the duty of the nobility not to let that happen.”

I thought for a moment and fully turned to Peiyu.

“For example, you were walking with the luggage all day today.”

“I carried nothing. I was the man and you were the woman, but I let you carry my baggage and I didn’t try to do anything with it.”

“That’s because of my status. I am the master and you are the servant, so it is only natural that you should carry the baggage.”

“In the same way, it is the duty of the nobility to ensure that the people do not rebel. Any noble who violates this duty must be severely punished.”[TN: This series is sometimes good with this kind of message, but the sad thing is, it’s not possible in modern times]

“Do you understand now?”

Peiyu looked at me with sparkling eyes like an innocent child.

[TN: Yay, 100th chapter. Also, I was trying to squeeze in another chapter, but couldn’t finish it on time.]

Join me on –>discord<— to get update notifications and release schedules.