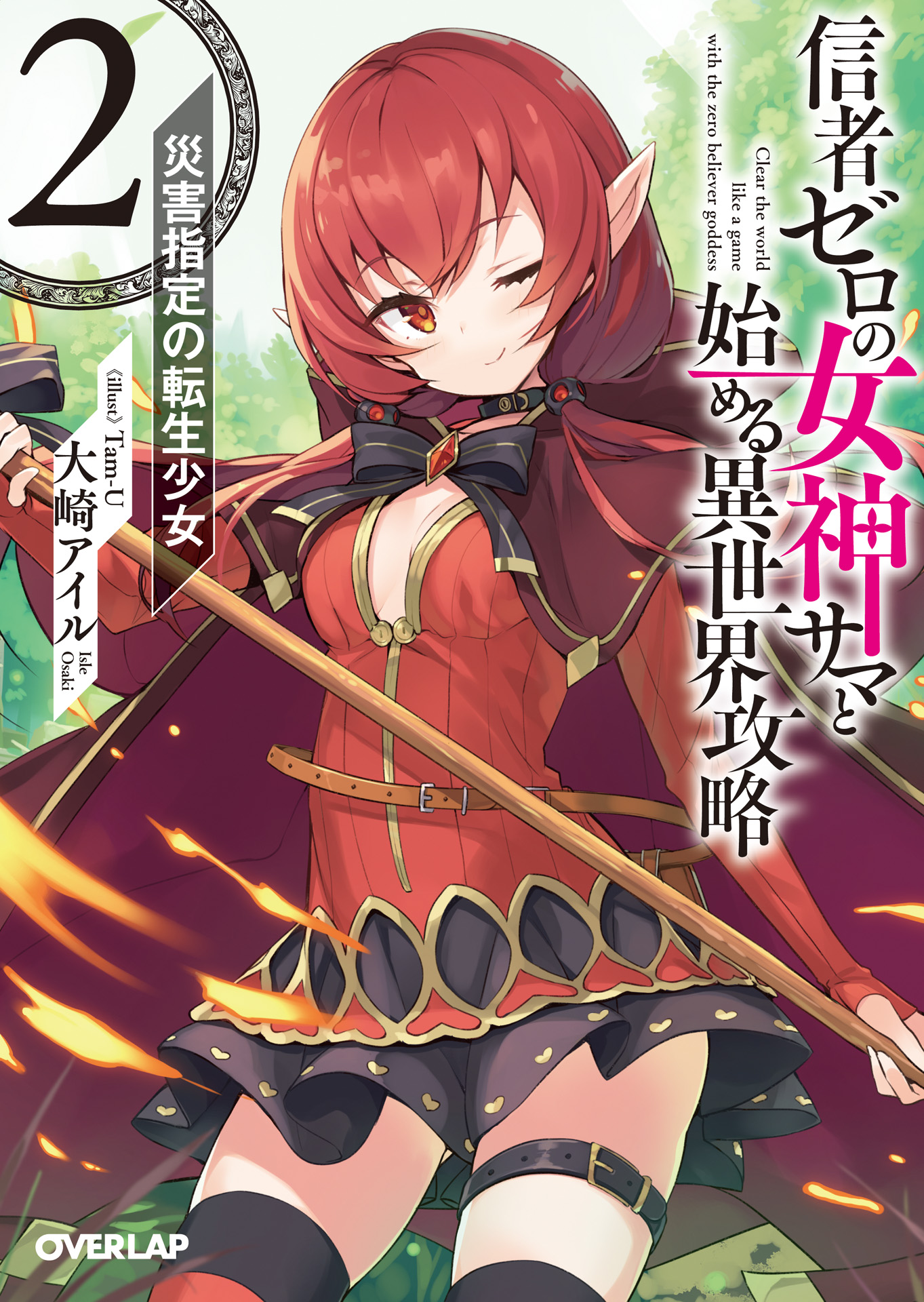 Epilogue: Promise of the Goddess and Believer

I was dreaming. The place was the Goddess’ space.

(Well, I would be called) I thought.

When I turned my gaze, I saw the goddess sitting on the ground.

If she sat on the floor with such a short skirt, I thought her underwear would be visible. …… But it wasn’t. The absolute domain of the goddess is still ironclad today.

“What are you doing?”

Even when I got close, she wouldn’t make eye contact with me.

“Makoto, are you going to stop being my follower?”

“I haven’t said anything.”

“You’re worried about what that white one said, aren’t you?”

White ……, she must mean the Great Sage-sama.

“Goddess-sama, were you on the side of the Demon Lord 1000 years ago?”

She answered with a pouting expression. Maybe she’s sulking.

“I never said I was quitting being the believer.”

My Spirit User skill is a ‘Gift’ given by the Goddess.

If I can’t use spirit magic, I’m in trouble. It’s a matter of life and death for me.

“Even if you quit as a believer, you’ll still have your spirit user skill.”

“Gods are not so narrow-minded as to take away what they have given you once.”

“Why are you repeating that question……”

“I had my suspicions from the start.”

She didn’t say her name, and she hid the fact that she was an evil god. However, the conversation is not progressing.

I should ask her persistently.

“Why did my predecessor side with the Demon Lord?”

You really don’t want to tell me?

No, I feel like this is information I need to find out myself.

“Goddess-sama. What do you really want? Please tell me.”

“…… It’s usually the other way around. Why would a believer ask a Goddess what she wants?”

She gave me a dumbfounded look.

The silence continued for a while. I stared blankly at Goddess’s face.

No matter how many times I look at her, she’s always an inexpressibly beautiful woman. Ah, she looks a little happy.

Goddess-sama sighed. She began to talk, sighing as if she had lost.

” …… By the time I regained awareness, the Titans had lost the War of the Gods, and there was no one left. They were all trapped in Tartarus, and I was alone.”

“I lived together with God Giants for a while. But even they were challenged by the Holy Gods, and they were all either killed or sealed away…….”

“Since then, I’ve been alone for over 15 million years. I tried everything to rescue my friends, but in the end, I was trapped in an underwater temple…….”

“But I still wanted to save my family……”

I wonder if that’s what the goddess really wants. However, it seems that humans cannot go to the place where the Titans are sealed.

And besides, the thing that the Great Sage-sama said hasn’t been explained yet.

“Why did Noah-sama’s apostle kill the heroes a thousand years ago?”

“Those False Gods. They told me that they would help the Titans if I sided with the Demon King and killed the hero.”
[TN: Akujin(LN=Evil God/悪神)

F-False gods? I’ve never heard of them before, but there are those too, huh.

“The False Gods are the gods that created the demons and monsters. They were also fighting against the Holy Gods. But in the end, they didn’t keep their promise though……”

“Then, so you’re not going to make me kill the hero this time?”

“In the first place, can you beat them? Makoto.”

I remember Sakurai-kun crushing the Taboo Dragon with a single blow.

In the first place, I really don’t want to fight with my classmates.

“The situation is completely different now than it was a thousand years ago. Back then, the Great Demon Lord and the demons ruled the earth. Humans were in despair and their faith in the Holy God was weakening. That’s why those False Gods thought they had the advantage.”

“I guess they learned from that, because now, on Mortal World, the moment you are born, they require you to join the faith of some goddess! And that’s why I can’t get any believers!”

The Goddess raised her voice.

“So, when Makoto’s classmate came from another world, I saw an opportunity. Because all Japanese people that came at the time were not in any religion!”

( I think there are a lot of Buddhists, but well, it’s like non-religious…… )

“But they’ve all been scouted out by those from Holy Gods faith.”

“You’re the one left. And it’s totally out of my calculation that my charm magic did not work on you at all……”

My Goddess-sama sure is a schemer.

“What are you talking about? I’m sure every goddess does this to keep her followers.”

It’s not something I want to hear.

“So, what do you want to do now on, Goddess-sama?”

The situation that makes humans despair is …….

I heard that it will happen in a few years.

“But I don’t want to be a pawn of the Great Demon Lord, you know? I seriously don’t.”

The Great Demon Lord is to be challenged, not obeyed. It’s not something to be obeyed.

“I know, I know. I don’t trust those Demons or those False Gods anymore.”

Are the words from Goddess true this time?

Ah well. I am the last one who can decide whose side to take.

“And as that White child said, if the Great Demon Lord takes over the world, humans will be treated as slaves. It was a terrible situation a thousand years ago.”

I want Sakurai-kun to do his best, but…

I guess we all need to work together.

“Well, there’s a lot of scattered information, so I will summarize it.”

I put my hands on my head and sorted out the information one by one.

“What I need to do from now is…

Is that what you’re saying?”

Can I do something like that?. The hurdle is insanely high, though.

“I’m not going to be that reckless with just one follower. Basically, Makoto is free to do as he pleases, you know?”

If she had asked me to do that right after we left the water temple, I would have definitely refused.

“The reason I asked you to go to the Great Labyrinth was out of the goodness of my heart to reunite you with your friend.”

You know? Noah-sama said with a cute face.

“What! You still doubt me!

“You have too many secrets, Goddess-sama.”

Nevertheless, it would come out later.

“Uuuuh, ……,” goes Goddess-sama with tears in her eyes.

“Stop trying to see through me! But, you know, now is the time. For the last thousand years, the belief in the Holy Gods has only grown stronger. The False Gods, who are unhappy with this, are trying to get the Demons to attack the world. You may be able to slip in there.”

“What exactly should I do to Slip in?

I feel uneasy. Perhaps she read my mind, her expression suddenly relaxed.

“I’m not going to force you. You are free to do as you please.”

Hmmm, so I can choose for myself.

But the thing that Great Sage-sama said something that really bothered me.

“I heard that my senpai’s evil apostle had gone crazy.”

“T- that was her saying it in a malicious way. It’s just that the believer had fallen too deep under my charm and was a bit strange to the casual observer! He seemed happy, you know!”

Ehhh? Is that happiness?

I wonder if that charm magic affected my Senpai way too much.

It seems to be a pattern of being absorbed in a vicious religion and thinking that only they are happy.

“It doesn’t matter, because my ‘charm’ doesn’t work on Makoto anyway.”

Is that the problem?

Well, in the first place, God and humans have completely different values. It’s impossible to understand them completely.

Goddess-sama looked straight at me.

[Will you accept the invitation of the Evil God Noah and turn the world’s system upside down?

………… This is the most troubling choice that ever came to me.

I looked at Noah-sama again. She looks divine, beautiful, and lovely.

Since the time of mythology, she’s been alone. Honestly, I can’t even imagine.

How many tens of thousands of times as lonely as I was when I first came to this other world and spent a year training alone?

Noah-sama was the first goddess to call out to me after I left the water temple.

Even though she had ulterior motives.

–I was able to fight the Griffon and survive because of Noah-sama’s blessings.

–Noah-sama gave me the Spirit magic.

And still, I haven’t been able to give anything back. If I don’t repay the favor with favor, I’m just an ingrate.

“Makoto, what will you do?”

Noah-sama was looking at me with her beautiful eyes with her one hand on her cheek.

I looked at the options again.

[Will you accept the invitation of the Evil God Noah and turn the world system upside down?]

This world is ruled by the Holy Gods.

And unlike my predecessor a thousand years ago, I have to contend with the False Gods as well.

I’m the lone apostle of the evil gods in this world.

( The difficulty balance is nuts……. )

It’s a shitty game, I can’t help but laugh.

I wasn’t too confused. Because I know what to choose in such situations.

“Well then, Goddess-sama, let’s make your wish come true together.”

I knelt down in front of Noah-sama, looked her in the eye, and answered.

Her beautiful eyes fluttered. I feel I will be sucked into those eyes.

……Maybe I’ve already been under her charm spell.

–In this way, I officially became an Apostle of the Evil God, aiming to overthrow the world with Noah-sama.

Well, HALP ME THOUGH for the NEXT Volume.

8 thoughts on “Clearing an Isekai with the Zero-Believers Goddess – Vol.2-Epilogue”