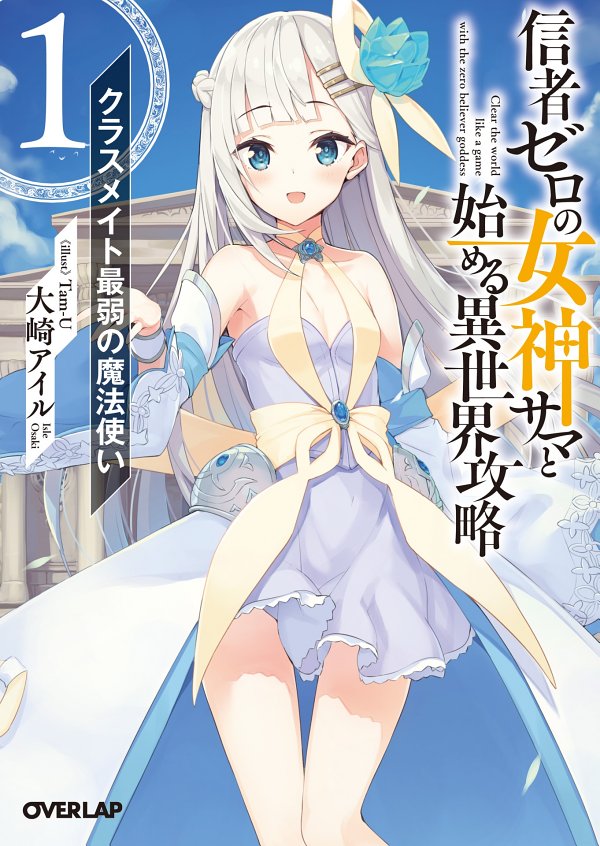 Epilogue: Small talk between the Goddess and the Giant God

Parting from the descendants of mortals, I move along the veins of the earth. For the first time in fifteen million years, the freedom is comfortable.

I slipped down to the ground. I wondered if this was the western part of the continent.

The forest stretches as far as the eye can see. But…

The spirits are hiding their breath and are not very active. This was unthinkable in the days when we, the Titan tribe, roamed the earth. Instead, they felt the presence of the Holy Spirit tribe looking down from heaven.

I’ve heard from the spirits, but the terrestrial world has changed now.

The youngest of the Titan Gods we serve.

The other Titans were captured by those bastards. She was left alone on the ground all alone, pitiful soul.

(Don’t you dare call me pitiful?)

Please accept my sincere apologies for this.

“…… You’ve just been awakened from your long sealing. …… But it’s convenient that someone with an eye for seeing through the seal of the Holy Gods has appeared.”

It wasn’t a lukewarm seal that could be detected by an ordinary human.

(How could it be so convenient? I made him do it. I gave that merchant boy a temporary boost of ‘divine power’ through my dagger. The effect has already worn off, though.)

Oh, I see. But he must not have been a follower of Noah-ojousama.

The believer’s Makoto, you say? Wouldn’t it have been better to be that boy?

(No. We’ll have that kid playing an active role later.)

Ho, it seems that she’s quite bought into that believer.

I had heard from the spirits about Noah-ojousama’s past apostles, and they must have all been powerful wizards and talented swordsmen.

Compared to them, though, that spirit-user boy seemed to be frail and less talented.

How is it, Miss Noah?

(Takatsuki Makoto is the best.)

(Takatsuki Makoto is the greatest apostle ever.)

Just one or two uses of magic is enough to cause him to run out of magic power.

Even for spirit magic, he is still inexperienced. And then there’s the recklessness of challenging the giant god race.

He can’t live long with that.

( He’s going to turn our world upside down. You’ll see.)

Lady Noah looks very happy as she giggles and laughs.

A thousand years ago, Noah-ojousama used her believers to create chaos in the world.

I hear from the spirits that it didn’t work out then.

Even with the petrification seal, I had heard about the world’s movements from the spirits.

It seems that Noah-sama, the only member of the Titan god race, has been doing a lot of work.

Though the results have not been very successful.

(It didn’t work out for me a thousand years ago. But we’ll be more cautious this time.  I’ll make those Olympus assholes frown.)

Her voice hides a dark shadow of vengeance. To have such a hateful voice.

That cute Noah-ojousama seems to have been warped.

You’re right, of course. Noah-ojousama, the most beautiful princess of the Titan tribe.

Seeing her, even humans, animals and demons would be fascinated.

That boy could not be in his right mind after seeing you when he was becoming a believer.

He must be so fascinated that all he could think about was you, Noah-ojousama.

Her speech was choppy.

“What is the matter…….? Noah-ojousama?

(Nothing of the sort. So, what are you going to do now, Gramps?)

I will now go around the world to find our people who are sealed away.

(Yeah, that’s a good idea. If we’re going to wage war against the Olympian god-tribe, we need to be ready for it.)

I knew you hadn’t given up yet.

But as it stands now, you only have the power to influence a single believer.

It seems that anyone who touches that dagger can be temporarily controlled, but not by much.

Come to think of it, it was Noah-ojousama’s order to make the boy’s companions stronger.

She had been secretly given the order earlier when I was released from the seal.

(Yes. You’ve done well, Old man. I’ve already given the boy my blessing. Now all we have to do is make his friends stronger.)

You spoil him a lot. Noah-ojousama, who usually treated her followers like nothing more than a bunch of feathers.

Hmm, that means you have something in mind. You haven’t given any orders to that follower of yours, have you? In case you’re wondering, he’s aiming for the undersea temple where Noah-ojousama is.)

(That’s okay, I have some ideas. Fufufu)

Truly, the young lady seems to be enjoying herself when she talks about her new follower, Takatsuki Makoto. This is the first time I’ve heard such a voice of hers.

“…… Please refrain from getting too involved with your believer.”

I’m worried. I don’t think it’s possible, but I wonder if you’ re in love with a believer.

It seems you have a profound idea. Then I shall obey.

(Be careful how you proceed. Don’t want the Holy Gods to find out.)

With that, Noah-sama’s voice was lost.

Well, then, I too will go out to find my friends.

On the way back to town. Fuji-yan’s tension is high.

“Come to think of it, why did Master get the Giant God-sama’s finger?”

Nina-san and I asked him.

“Fufufu, this giant god’s finger is a Magic Crystal with a tremendous amount of energy. With this energy alone, if used as a weapon, it could destroy an entire country.”

“What? Hey, isn’t that dangerous?”

Lucy quickly distances herself from Fuji-yan.

“You’ll be fine if you handle it carefully. Well, it’s been a very productive adventure!”

“Well, I’ve got a powerful blessing, too.”

Fuji-yan and Nina are smiling at each other. I glanced at Lucy.

Lucy is carefully holding the staff that the giant old man had modified for her.

Earlier, she tried earth magic a few times, and it seems to be quite a useful weapon.

At any rate, it seems that if you put magic power into it, the magic will be activated.

Although it seems to have poor mileage, it is perfect for Lucy, who has a surplus of magic power.

Everyone seems to be satisfied with the results.

– I stare at Goddess-sama’s dagger.

Something about this case was suspicious to Goddess-sama, wasn’t it?

Normally, she would have warned me in advance or told me to run away.

She intervened directly at a timely and predictable time.

Moreover, it was the Goddess’s friends at the back of the dungeon.

I’m the only follower of the Goddess who had zero followers.

This is something I recently learned, but I can see the Goddess and talk to her.

I heard that such a being is called an ‘apostle’. A priestess is also a type of apostle.

An apostle can see the image of God.

The apostle can hear the voice of God.

If the apostle is troubled, God will give them advice.

If the apostle wanders, God will guide the way.

If the apostle prays, God gives the power of ‘blessing’.

That’s a good thing. However.

Once the ‘oracle’ descends, they must carry out God’s orders with their lives.

I heard there is a rule like that. The Goddess said.

That is a request. Not an order.

I’m weak. After all, I’m an apprentice mage whose stats is below that of an average person.

I guess I’m not capable of carrying out the Goddess’s orders now.

But it should be clear sooner or later.

The true wish(order) of the Goddess.

–And so, the Goddess and I began our campaign to capture the other world.

4 thoughts on “Clearing an Isekai with the Zero-Believers Goddess – Vol.1-Epilogue”