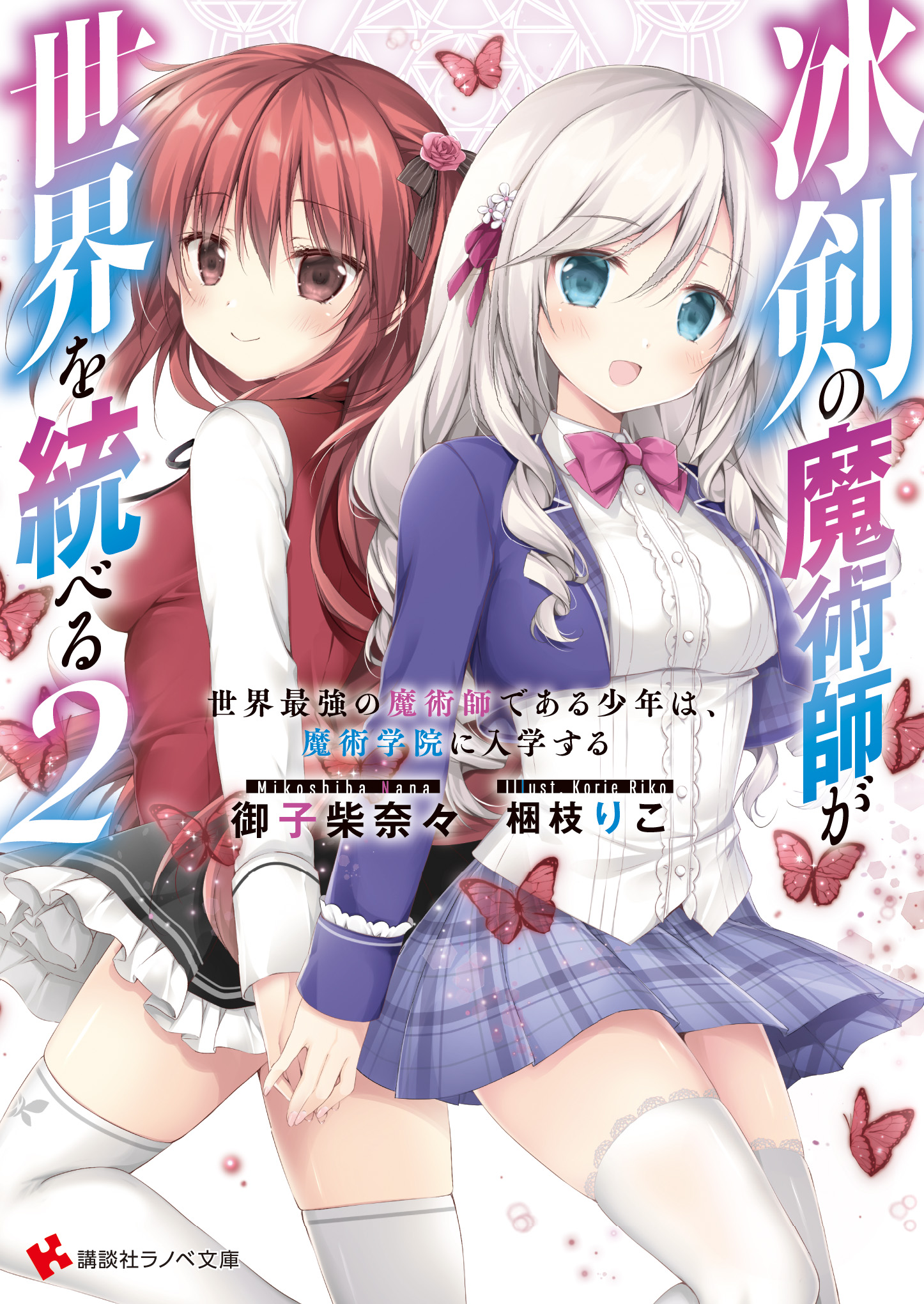 “A-And the match is overrrrrrrrr! But this is …… unprecedented. …… The match lasted …… two seconds! This is the best time ever in the long history of Magic Chevalier!”

No, this match can’t be described with such words alone.

There were probably very few sorcerers in the room who could properly describe this match. I also almost missed it, but …… managed to understand it. Then, a player suddenly appeared in the main tournament.

Everyone knew that this player was the real deal in this tournament.

Plain and simple. That one sword was all that was needed to decide the match. Nothing could have been more obvious.

“The winner is …… Lucas Forst! He is a second year student at the Melcross Magic Academy! He was an unknown player who wasn’t on the list of potential winners, but …… here comes the Dark Horse!”

Only the name is in my head. He is a second-year student at the Melcross Magic Institute and a rare sorcerer who uses a Katana instead of a sword. His fighting style suggests that he is good at swordsmanship, especially in close quarters combat,……, but no one would have thought that he would be this good.

I immediately checked the player again in the pamphlet I was carrying. At the tournament, pamphlets are handed out with the list of players, and the more notable the player, the bigger the slot.

Lucas Forst’s slot was probably the smallest of them all. There was only one line of introduction.

He is not very tall at 165 centimeters, but his cute face is sure to attract many women,……, because he is reputed to be attractive and neutral for a man.

His long black hair is pulled back in a single strand, and although his face is not fiery, there is a certain masculinity to it. He put his katana back in its scabbard, bowed, and left the hall.

“Hey, Ray. Did you catch that?

“Quite simple. He enhanced his body with internal code, got close enough to …… slash him.”

“Yeah. There is nothing special about it. Simple, yet powerful. It’s also difficult to counteract. If they specialize in super close range, there’s nothing you can do about it.”

“The opponent was the one who fought with Rebecca-senpai in the final last year. He was one of candidates to win the main competition of this magic swordsman competition,……, but never expected to be defeated in the fastest time of the competition,…….”

“…… Ahh. Seriously, this kind of situation can happen.”

Fortunately, Rebecca-senpai will only face him in the finals. And it will probably become a reality. How will she fight against him?

This is how the tournament went on, with a lot of turbulence.

“Congratulations on getting past the first round.”

Later, while I was on my way to work as a member of the management committee, I ran into Albert.

The next game was …… his game, I believe.

He made it through the first round, and now it’s the second round. I’ll be watching the game in the waiting room on the first floor as a member of the management committee after I finish my cleaning duties.

And since I was trying to be early, I was heading down to the basement as quickly as possible. …… I thought I’d have time to have a little chat.

“Yeah. I’ve watched her fight, and I don’t think she’s the type of player I’d want to be around. After all, she can’t be trifled with.”

I’ve heard that this is already a big deal not only among the spectators, but also among the players. After all, it was a head-on defeat of the crimson explosion, a large-scale chain magic.

That was how I understood Ariane’s true nature. She seemed to be a balanced type, but in reality, she was a swordsmanship type. She is probably a sorceress who specializes in super close range.

The trouble with a sorcerer who specializes in close quarters is that it is difficult to take countermeasures. You need to make sure that they can’t get into your reach. However, this type of sorcerer has an excellent command of internal codes. This is why they know how to fight in close quarters.

“Ariane, whose main domain is super close range, is ……”

” …… I know without saying anything from there. There is no way to counteract her now. And I also specialize in close quarters fighting. At the end, when it comes down to it, it’s going to be a battle of strength against strength. …… I know that.”

“That’s right, sorry. That was unnecessary.”

Albert and I shook hands firmly and smiled at each other as we passed each other heading in opposite directions.

Albert’s hands were heavy. I wondered how much training he had gone through. After the battle with me, he knew the reality, but still continued to struggle. And in front of him stands a powerful opponent named Ariane Olgren.

I don’t want either of them to lose. But I hoped that Albert’s efforts would be fruitful,…….

After cleaning up with Clarice, I watched Albert’s match. In the second round, his opponent was a student from the Diom Magic Academy. The opponent was a balanced type, but in the middle of the game, he suddenly brought the game into close range. …… Albert was taken aback, but he still managed to cope with the situation and won the game.

In this way, Albert has finally advanced to the semifinals. …… As we discussed earlier, Ariane will be next. What will happen to the game ……

After the game. Due to lack of manpower, Clarice and I were in charge of organizing the exiting people. Although it’s not too hard, since we’re only warning people to be careful. …… The summer sun shines on us relentlessly.

In the midst of all this, I spotted a certain player being interviewed.

This is the most exciting player in the tournament right now.

With his katana still in his waistband, he was answering questions with a blank expression on his face. The crowd of interviewers was unbelievable. I could faintly see his expression through the gaps in the crowd, but it was completely unreadable. It was as if all emotion was missing. This is exactly what makes him look like an elaborate doll.

One moment. For just a moment, our gazes crossed.

No doubt, he was staring at me. If it was by chance that our eyes met, he should have turned away immediately. And yet, he stared at me as if he were looking at my eyes,…….

Why a look at me?

I have no name recognition at this convention, I’m just a member of the management committee. Could it be that the look I felt before was him ……?

But why would a sorcerer of his caliber care about me? Do I know him?

I am one of the seven great sorcerers of the …… Ice Blade Magician. That makes sense to me, but he quickly averts his gaze from me.

I wonder if I’m overthinking this.

“? What’s wrong? Do you feel sick? Are you feeling okay? If so, I’ll escort you to the first aid room. With this heat, heat stroke is a possibility.”

“Fuuh. That’s fine, but don’t be too absent-minded! I’m worried about you!”

And so we went about our business.

Since then, Magic Chevalier progressed smoothly,……, and finally the semi-finals of both the rookie competition and the main competition were completed.

With the best 4 players, there are now 8 players left, including the rookie and main competition.

Who will be the winner of both the rookie competition and the main competition?

I thought about that, but I had a concern.

I hadn’t spoken to Amelia since the start of this competition. No, I’ve been watching her matches and cheering her on without fail.

Amelia is always smiling and waving at us, looking a little embarrassed.

There is no hint of weakness.

But Amelia is good at hiding it. I don’t know what she’s really thinking. …… I have no idea. And I won’t know until she tells me. Amelia may think that she is this kind of person, but I just have my own ideas about that.

I don’t know if I can touch that heart of hers. No matter what happens in Amelia’s future, I definitely want to help her. But it was for her sake, but it was also for my own.

I am on the way, just like everyone else. Although I am said to be the strongest of the seven great sorcerers, I realize that I am still in my infancy.

Right now, I don’t have Master next to me anymore.

I have to move forward by my own will.

I thought that with everyone, with Amelia, …… that I would be able to move forward again. But is that really the case?

Am I making the right choice?

I whispered her name.

You can sponsor an extra chapter for Ice Blade Magician at 6$ a chapter on –>Ko-Fi<—. DO mention the series you’re supporting for.